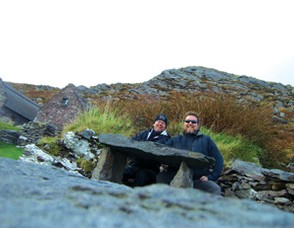 The first morning of a surreal blue sky above the Atlantic, blowing fragrances of mist over Bolus Head, giving it this unreal atmosphere of long forgotten tales we had been thrown upon those first days there, made me watch that impressive huge man walking up the road.

Walking it as if he never had done otherwise, sitting down with us at the edge of the rock, hands slightly covered in paint, wearing a skull ring, looking at me with an intrigued gaze, prompting ‘are you a sinner?’ into my startled face. I am not one to fall easily out of words, but that brief moment he managed to shut me down, whereas ; ‘of course I am,’ I replied, quite soon after, curious myself about this artist who seemed to be part of the sea, the rocks, and even the stone cottage overlooking the cliffs.

Where the other one made us wait upon his appearance until he kind of stumbled down that same road towards his fellow friend, grinning a jetlagged good morning at me, as he passed by.

Lurking from under his black cap, a smile grew more profound, as his eyes pierced into the moving sky, patiently watching it wake up in this world, and I could tell that there was a sketch being created behind those dark silent eyes of his.

This little brotherhood of beauty had been founded there on Cill Rialaig Road, to capture what maybe will not ever be contained in the Irish wind.

Yet they would never cease to try, as they eloquently called themselves
Brother Rod and Brother Scott, conquering the winds and rains, keeping the easels steady, making the elements fall into place, sculpturing the oils on their canvasses, so alike, yet so different.

For what was in front of them, made the thrill of Plein Air, two lone painters versus two lonely rocks, carrying so many stories, all four of them, in that Wasteland of this Transatlantic Duet.